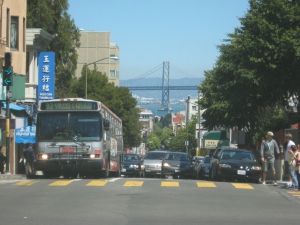 First tell her she gets to read at LitCrawl. This will be terrifying enough because, amongst other things, she will not know what to wear.

Next tell her she’ll be reading with people she’s never met before, and while she’s sure they’re very nice poets, she’s shy. And she’s pretty sure they’re younger than her, although she has no data to support this certainty.

She is also pretty sure they’ll know what to wear.

After that, send her some pre-reading information and include things like this:

“the audience can be loud at times, the scene rowdy, and venues packed beyond belief”

(The middle-aged suburban formerly-midwestern poet’s eyes grow large. She would like to know exactly what is meant by “rowdy.” Could it possibly involve rotting vegetables being thrown at the stage? Or getting the hook?)

“bring your flexibility and your sense of humor”

(The middle-aged suburban formerly-midwestern poet wishes she were super-flexible with a generous sense of humor, but she knows she’s really more like Bert than Ernie, more like Rabbit than Tigger. And she is already nervous about this reading, and unsure of what to wear).

“parking will be very challenging”

(The middle-aged suburban formerly-midwestern poet remembers life back in the midwest when “challenging” parking meant you would have to walk from the far edge of the parking lot to the venue. Those were the days. She knows that “challenging” parking in the city means: NO parking. She knows this means she should take transit, and while she’s good with that in principle — she’s a regular on the 22 bus, on the CalTrain — she can’t but help going back to the memory of waiting for a Muni that never came. Never. In fact, she’s not sure, but she might still be on that platform in the city waiting for that Muni.)

(The middle-aged suburban formerly-midwestern poet remembers the last after-party she went to. It was in 1989. Yes, it was in the Eighties, people. It was after her high school’s production of Oklahoma! She knew what to wear, and she knew her best friend would be there. She knows all the cool kids will be at the after-party, but she has never been a cool kid. Also, she probably can’t afford the extra babysitting time the after-party would require, so,… [here the middle-aged suburban formerly-midwestern poet wanders away mumbling incoherently and looking dazed]).

So, um, yes. She’s a little nervous about my reading on Saturday. And she’s adding up the psychic and actual cost of this little reading (seriously, we need grants for writers so they can attend their own readings!). And she’s telling herself, You don’t have to be one of the cool kids. And, You can wear one of your Haystacks! And your boots (thanks Mom and Dad)!

But she probably won’t stop wondering exactly what “rowdy” means until after it’s all over. And she would love for you to come if you’re in the Bay Area and if you can swing it; info here. And she wants you to know, if you never hear from her again, she’s probably somewhere up in the city, on a fog-cloaked platform, waiting for a Muni.

13 thoughts on “how to terrify a middle-aged, suburban, formerly-midwestern poet”