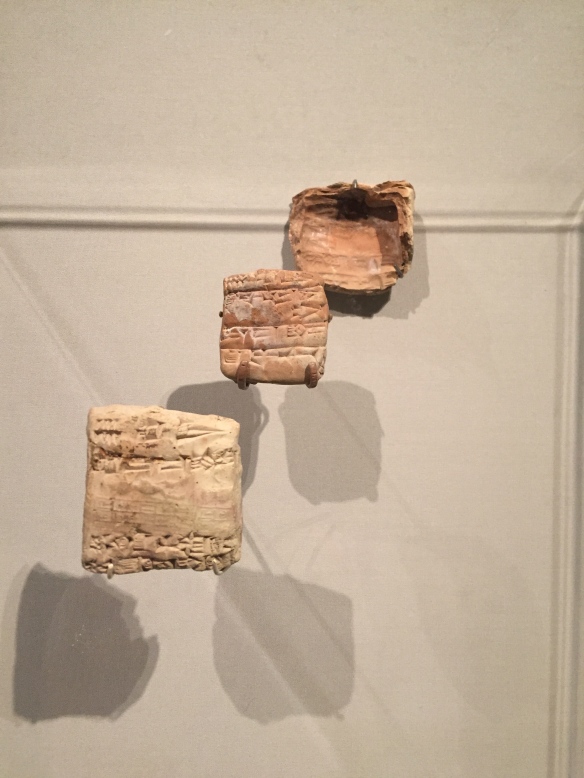 Cuneiform Tablet with Receipt for Eight Bronze Sickles and Envelope, 2050 BCE, Clay (Detroit Institute of Arts; photograph by me)

I began writing this in the last hours of another August.

And it has done so again, and this last turn around the sun has been a doozy. I mothered two teens and an almost-teen. I finished my MFA. I freelanced and edited and taught. I sent out poems (and landed several in journals I’ve been sending to for years—yay!). I sent out two full-length manuscripts. I kept mothering two teens and an almost teen. I won a poetry contest and did not win a first book contest (many times over). I ended my long and long-difficult marriage. I found a full-time teaching job and bought a house. I did my part to resist the diminishment of our democracy. I adopted a cat. I pitched a panel on the work of Laura Jensen for AWP19 (and it was accepted—also yay!) I kept mothering two teens and an almost-teen. I grew houseplants that did not die. I started my new job (which I love—another yay!). I picked out paint colors and cupboard pulls and window treatments (groans). I went to IKEA at least twenty times (also groans). I am still mothering two teens and an almost teen (soon it will be three teens—gulp).

Even the easiest lives on the planet—and mine is one—are often hard. But here I am, just past another August. Now my age rounds up to fifty. The life that for so long I thought I was making is not the life I find myself living. But here I am. So much is still unsettled—the kids and I are about to move, again (this time just several blocks away); I still don’t have a book to my name; I’m embarking on the project of single motherhood and full-time work, and a far less stable financial picture. But here I am.

I took the photo above—of a museum display, “Cuneiform Tablet with Receipt for Eight Bronze Sickles and Envelope”—last August (2017) on my birthday. The artist is unknown. Here’s what the exhibit text says:

You are looking at an opened envelope and the clay tablet it contained, like a letter. The outer shell—the envelope—was invented as a security measure. A version of the letter was repeated on the envelope, which had to be broken to verify the message inside that 8 bronze sickles had been delivered safely.

Now it’s September, and I invite you to join an online reading project begun last year by the poet Shara Lessley. She proposed that anyone interested join her in reading women poets during the month of September, and sharing what they’ve read on social media with the hashtag #SeptWomenPoets. I participated last year, and it was a wonderful way to build community online around poetry, as well as to discover new-to-me poets. It also made for a much more nourishing and relaxing Twitter feed than I’d had before. Here’s what I’ll be reading this year for #SeptWomenPoets:

Welcome to The Stanza

Molly Spencer’s poetry has appeared or is forthcoming in Copper Nickel, FIELD, Georgia Review, The Missouri Review online, New England Review, Ploughshares, Prairie Schooner, and other journals. Her critical writing has appeared at Colorado Review, Kenyon Review Online, The Rumpus, and Tupelo Quarterly. Her debut collection, If the house, is forthcoming from University of Wisconsin Press in fall 2019. A second collection, Relic and the Plum is forthcoming from SIU Press in fall 2020. She holds an MFA from the Rainier Writing Workshop, and is Poetry Editor at The Rumpus. Molly teaches at the University of Michigan's Gerald R. Ford School of Public Policy. Find her online at www.mollyspencer.com.

Some of my poems…